If you are a member of the original vbulletin forum and wish to post with your former username you'll need to Reset your password  If you need help remembering your username or the email address you used to register, please feel free to contact Tony using the CLNEWS Contact Form

Centre for Research on Globalisation / China?s Ban on Imports of ?For...

Last year, China announced a ban on imports of ?foreign garbage?. The result? Western stockpiles of used paper and plastic have reached crisis proportions. Adam Liebman explains why we need a less rosy notion of what actually happens to our ...

The post China's Ban on Imports of "Foreign Garbage": No More of Your Junk appeared first on Global Research.

Source: China?s Ban on Imports of ?Foreign Garbage?: No More of Your Junk
92

If one feature of any truly revolutionary moment is the complete failure of conventional categories to describe what's happening around us, then that's a pretty good sign we're living in revolutionary times.

The post The "Yellow Vests" Show How Much the Ground Moves Under Our Feet appeared first on Infoshop News.

Source: The ?Yellow Vests? Show How Much the Ground Moves Under Our Feet
93

AlterNet / 'The president committed a fel...


This just got very serious.

Former Acting Solicitor General Neal Katyal explained the monumental significance of a new court filing by the U.S. Attorney from the Southern District of New York highlighting the case that President Donald Trump is guilty of a serious crime.

"For the first time, you have federal prosecutors essentially saying that Donald Trump committed a felony," Katyal said to MSNBC's Ari Melber on "The Beat" Friday night. "And there's three pieces to the claim."

Citing the 11th page of the new sentencing memo in the SDNY case against Michael Cohen, Katyal explained: "Cohen made these campaign finance payments at the direction of Trump. And what we're talking about here are payments made to two women for their silence for having alleged affairs with Trump and were going to go public. And what happened was is that Cohen paid those folks and did so at a time when you're only supposed to give $2,700 to a campaign. And that's for a very important reason: Congress has said we don't want rich people buying elections ? we want transparency in our election process."

Then he moved to the second point, on page 12.

"The prosecutors say, 'The agreement's principal purpose was to suppress this woman's story so as to prevent the story from influencing the election. So they're taking away the Trump defense, which was there in the [John] Edwards case: 'Oh, I was doing it to protect my private life, or something like that,'" he continued. "They're saying, 'No, this was done with a purpose of influencing the election.' That's what the campaign finance laws are all about."

Finally, he noted that the prosecutors argued that the charges are particularly "serious" and strike a "blow to our democracy."

"You put all those things together: The Southern District federal prosecutors are alleging that the president committed a felony," he concluded.

He noted that the document is not itself an indictment, and Trump may have defenses against their claims, but what the prosecutors are saying is clear.

Watch the clip below:

Centre for Research on Globalisation / The History of War: What the ?...

Last post by Centre for Research on Globalisation - December 09, 2018, 11:03:45 am
The History of War: What the ?Neocon Chickenhawks? Have Wrought. One Trillion Annual Military Spending

The 100th anniversary of the signing of the Armistice to end World War I has generated a lot of discussion and articles about the so-called ?Great War.?

Most of the neocon chickenhawks who so eagerly led us into the disastrous ...

The post The History of War: What the ?Neocon Chickenhawks? Have Wrought. One Trillion Annual Military Spending appeared first on Global Research.

Source: The History of War: What the ?Neocon Chickenhawks? Have Wrought. One Trillion Annual Military Spending
95

Centre for Research on Globalisation / Canada: Workers Rights and Gen...

Last post by Centre for Research on Globalisation - December 09, 2018, 11:03:45 am
Canada: Workers Rights and General Motors Plan to Shut Down its Oshawa Plant. Brutal Corporate Strategy. Relocating to China?

General Motor?s plan to end production at its Oshawa plant at the end of 2019 is a callous, cynical act by the U.S.-based multinational auto giant that needs to be challenged. After accepting $13.7-billion bailout offered by the Canadian public ...

Centre for Research on Globalisation / NATO Aggression Reaches for Ru...

Last post by Centre for Research on Globalisation - December 09, 2018, 11:03:45 am
NATO Aggression Reaches for Russian Waters

The recent Kerch Strait incident marks a new low amid the US-led expansion of NATO eastward.

The intentional provocation executed by Kiev saw three Ukrainian naval vessels seized by Russia. The vessels were intentionally violating the protocol for passing through ... 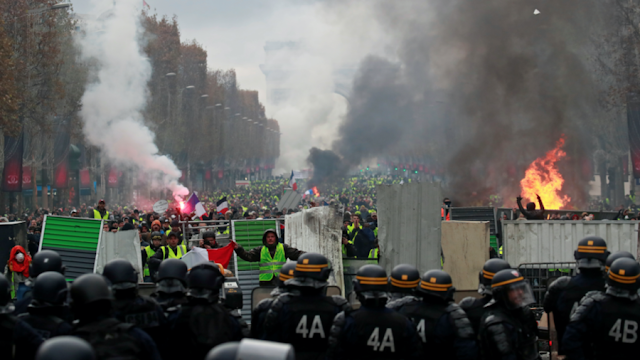 Postscript: Since this article was posted, the government of Macron has indeed folded as the article suggested he might. This is the first time in his 18-month presidency that Macron has backed down in the face of opposition to any of his policies and it is not unconnected to the fact that his personal poll ratings are at a record low of only 26 per cent. Macron and his Prime Minister, Edouard Philippe, have postponed the fuel tax increases, but only for six months, no doubt in an attempt to defuse the movement of the gilets jaunes and to buy time to prepare for protests at a later date.
Whether the climbdown is enough to stop the protests remains to be seen. According to the French think-tank, Institut des Politiques Publiques, tax and benefit changes by Philippe/Macron will leave the bottom fifth of the population worse off, with huge gains for the top 1 per cent.
A prominent member of the gilets jaunes, told the Financial Times, ?The French want more than crumbs. They want the whole baguette?. (December 5)
Another analyst, Nicolas Bouzou, thought that the Macron climb-down would not be enough. ?We have a real problem with living standards?, he said, ?and there is real hatred for political elites and authorities. The fuel tax increases were nothing more than a trigger.? John Pickard, editor, Left Horizons UK