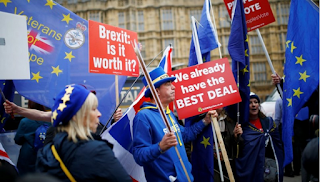 From Nick T in London

Labour has played a canny game but I think the time is fast approaching when they need to get off the fence.

Brexit is a right wing nationalist project - just look at who is  leading it.  I could never associate myself with something pressed  forward by Johnson, Farage, Duncan-Smith et al with Trump and Murdoch  also firmly behind it.

I don?t understand Lexit - what does it  mean ?  The problems in British society are caused by capitalism not the  EU.  It is very difficult to build  support for socialism in a sea of nationalism - look at the polls where  Labour is level or even behind this shower.  That's largely down to  Brexit with many working class communities fearing that Labour will  unravel the referendum whereas the Tories will deliver the change they  voted for.
You can?t build  socialism in one country or by retreating behind the borders of our  little island.  Socialism is international or nothing.  The job of  socialists should be to transform the EU and its member states - not  help break them apart in the wave of right wing nationalism which is a  symptom of neoliberalism failing across Europe.

Labour needs to  get into the working class communities that voted Leave and to say to  them we fully understand your anger at decades of neglect and why you  voted the way you did.  We need change but that won?t be aided by  leaving the EU.  The Brexit project is about making you poorer with a  low wage deregulated economy.

Source: Opinion: Brexit Will Make You Poorer (//)
Text only | Text with Images